Samsung is very well known for its unique divisions of smartphones, home electronics, TV, audio and printers. However, its memory department, that is devoted to engineering SSD drives, memory cards and Optical Disk Drives, is one of a kind. In fact, Samsung is one of the biggest manufacturers of SSDs and NAND memory. Therefore, it was not astonishing when Samsung announced its being the first to release SSDs using new 3D V-NAND. 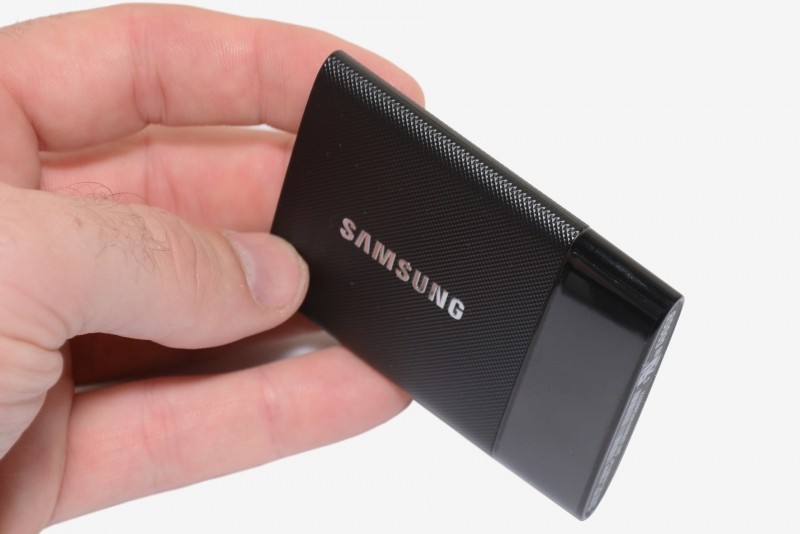 A brief on 3D V-NAND

Magnificently, 3D V-NAND overcomes the problem of squeezing cells closer and closer together, as is the case with existing 2D planar architecture and technology. It does so by stacking memory cells on top of each other. Samsung has upgraded from the SSD 850 Pro to the SSD 850 Evo which uses 3D TLC (Triple Level Cell) NAND. Although TLC NAND increases memory density, this comes at the cost of performance and endurance. Yet, TLC NAND is considered to be cost effective and affordable.

Samsung, yet, took a new leap that is clear in its new portable external hard disk, the Portable SSD T1. This drive has been picked by us as the best external solid state drive (SSD) since it was released until its brother, the T3 model succeeded it. Coming in an extremely compact form smaller than name cards and credit cards, Samsung Portable SSD T1 measures only 9 mm thick. It is featherlight too, weighing just 30g and very stylish. It features a mix of textured and smooth surfaces.

However, there is a small take on this device; which is represented in the supplied USB ribbon cable. It is clumsy and makes the device less portable than it would have been. A much better solution would have been including an integrated retractable USB connector.

Because the Samsung Portable SSD T1 provides a USB 3.0 functionality, it uses a SATA to USB bridge. USB 3.0 offers a maximum data transfer rate of 5Gbps or 625MB/s, which is slightly lower than that of SATA 6Gbps. Performance is expected to have a few issues after factoring overheads, compared to the SSD 850 Evo. Yet, it should still be miles faster than any other mechanical portable external hard disk drive.

UASP (USB Attached SCSI) protocol, which usually improves USB 3.0 performance, is supported in the Portable SSD T1. UASP works on transferring data and commands in separate “pipes” as well as executing multiple commands in parallel. Better performance is expected in compatible systems (most modern systems running Windows 8 and Mac OS X 10.8 and above should support UASP).

UASP compatibility is dependent on a few hardware and software factors:

Such factors are a must for a functioning UASP mode. Having mentioned that, the benefits can only be seen in random reads (that’s where commands and data gets queued) and it varies quite greatly because so much of its performance potential is dependent on firmware and drivers. That is why you should not be concerned if your system doesn’t support UASP or you cannot get UASP to work.

The Samsung Portable SSD T1 is PC and Mac compatible. However, Mac users need to download a SCSI ATA Transition driver for the drive to work. Starting up the drive, you will find a 128MB partition automatically launched with two setup files for Windows and Mac machines. After running it, you will need to insert a password, which is necessary whenever you attach the drive, for optimal security. In fact, this password is extremely important as accessing your files and the drive won’t work without it and, much more, it cannot be reset. Upon forgetting the password, bring the drive in to the service center where they will have to reset your drive. The major loss would be losing all the data on the drive. As dramatic as it might seem, this is the price tag for an utmost secure drive.

How fast a drive copies a 1.72GB movie file is usually the File Transfer test. It’s a measure of sequential transfer speed. Mechanical portable external hard disk drives are quite interesting in this regard. They are highly competitive when it comes to sequential read and write performance. According to some experts who tested this drive, the Samsung Portable SSD T1 copied their movie file in just 18.91 seconds, which is absolutely amazing. No wonder then why we granted it our top rank in our list of best solid state external hard drives.

On PCMark 7, the Samsung Portable SSD T1 blitzed the competition by recording a score of 4759. This was 658 points or 16% more than the Transcend ESD200. It was also over 300% more than what the WD My Passport Slim and Seagate Backup Plus Slim could manage. Looking at the breakdown of the score, we can see that the Portable SSD T1 was clearly superior across all workloads. 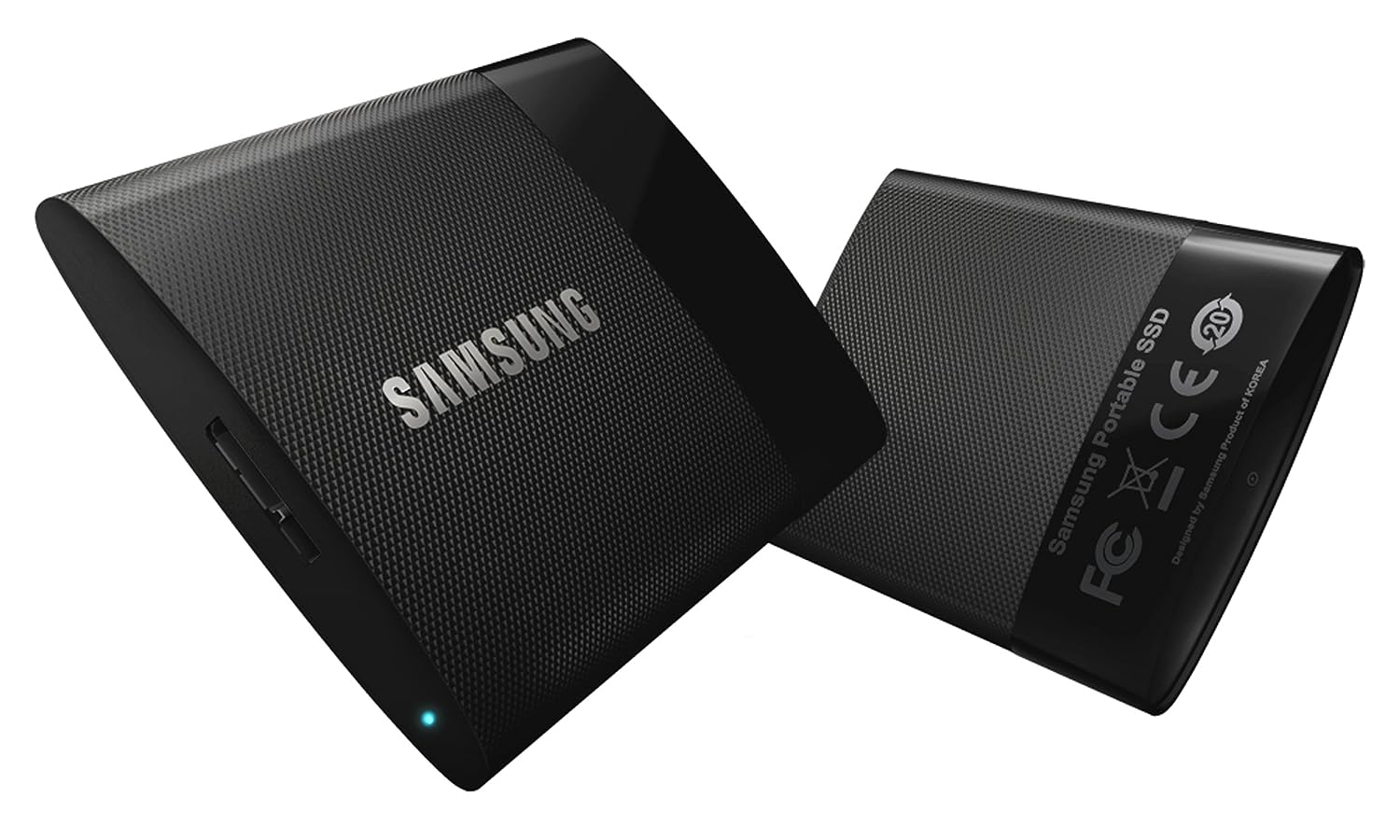 For the techies, some of you might question the effectiveness of USB 3.0 and the gulf in performance over a native SSD – are you paying for something you can’t fully realize? Perhaps, as can be seen in Samsung SSD 850 Evo internal SSD reviews carried out by IT ptofessionals, the internal native SATA 6Gbps drive is roughly twice as fast as the Samsung Portable SSD T1 running on USB 3.0. Does that mean you’re being short-changed? Not really since USB is the most used interface for peripheral connectivity across various devices and systems. According to recent USB 3.1 performance reviews, the latest USB standard might be just what the Samsung Portable SSD T1 drive requires to unleash its potential and it’s a pity that the drive wasn’t equipped with it. Nevertheless, the figures from the Samsung external drive are in the ballpark of a 2013 mainstream internal SSD, which is still miles ahead of any mechanical hard drive as well as older external SSD drives.

It is also a very handy drive. Performance and portability aside, the Samsung Portable SSD T1 also deserves props for its ease of use. It operates with maximum ease on both Windows and Mac OS X systems. Securing the drive with a password is a piece of cake step.

This might – or might not – justify its high price. The Samsung Portable SSD T1 is available in three capacities points – 250GB, 500GB and 1TB – and the 250GB model that was reviewed here costs $299. Indeed, this is considered a lot of money. It’s also quite a bit more expensive than an equivalent internal SSD drive.

Prices of flash memories have been falling nonetheless. The Samsung Portable SSD T1 is actually quite affordable in comparison to the Transcend ESD200, which would startle you at $408 two years age. Although prices continue to fall, flash storage drives are not yet a very affordable issue as mechanical hard disk drives. Drives like the Samsung Portable SSD T1 are an optimal option for those who find performance a premium need.