It took quite a time for 10 Gbps USB 3.1 devices to arrive, and SanDisk’s Extreme 900’s 800 MBps performance is a big blow in the SSD industry. This drive is the best USB 3.1 external SSD in terms of performance/speed and has been chosen as a top performer in our best Portable External SSD list.

SanDisk’s Extreme 900 SSD is quite handsome. You can only slide it in large pockets compared to Samsung’s pint-sized T1/T3 because it is somewhat chunky and heavy. It is roughly the dimensions of a typical external 2.5-inch hard disk drive. The size of the Extreme 900 is quite justified in terms of heat dissipation and shock resistance. It seems quite logic, but you can understand the size’s bigger cause when you know that anDisk’s use of two TLC (Triple Level Cell/3-bit) NAND-based, 6 Gbps SATA SSDs inside, squeezed in with them are the controller and bridge chip required for running them in RAID 0, which is the only way to increase 6 Gbps SATA into 10 Gbps performance. After SATA RAID, the next performance step would be PCIe SSDs and a multi-lane PCIe-to-USB bridge chip.

In terms of ports, the Extreme 900 features a USB Type C port, whose reversible connector is a joy, and ships with both Type C-to-Type C, and Type C-to-Type A SuperSpeed cables. This might sound great, however, not every USB-C device supports 10 Gbps USB 3.1. Right now, a USB-C port can mean everything from USB 2.0 speeds to 10 Gbps USB 3.1 or Thunderbolt. This drive is a very good thunderbolt SSD for MacBook Pro systems.

In specific, older Type A USB connectors give you a 50-50 chance of plugging one in correctly the first time. In fact, you don’t have the plug oriented the right way more often.

SanDisk Extreme 900 has 3 offerings available: 480 GB, 960 GB, and 1.92 TB; retailing for $400, $600, and $1,000, respectively. It gives 3 year warranty along with each version. The online drives at Amazon, however, are 20% less which puts them on par with Samsung’s T1/T3 price-wise. Although other external USB hard drives are only $75 a terabyte, the SanDisk gives you a dramatic leap in performance given its high price. Running the AS SSD benchmark, the Extreme 900 was rated at 796 MBps when reading sequentially. Because of Extreme 900’s TLC NAND, AS SSD write performance varied from 781 MBps when the TLC-as-SLC (Single Level Cell/1-bit) cache was in play, to 598 MBps when the cache was exceeded. While in the average use, the higher number should prevail But either way, we’re talking about an external drive that’s almost 400 MBps faster reading, and at a minimum, 200 MBps faster writing than its closest competitor. Although SanDisk did reveal how much TLC was used as SLC cache, in the industry so far it’s generally between 1.5% and 2% of total capacity.

To read/write a single 20 GB file, speeds reached 666 MBps and between 550 MBps and 454 MBps, respectively. The speed was again dependent upon whether the cache was in play. Starting consecutive operations too soon meant the numbers go down. However synthetic benchmarks generate numbers faster then real world copy tests.

Going for a solid state external hard drive can be a challenge to some, but considering all factors around, especially that related to performance, it means a lot to enthusiasts whose main concern is transfer speed and reliability.

Because it is formatted in universally readable/writable exFAT, the Extreme 900 can be used with any device that can deal with USB mass storage. But exFAT is the performance kiss-of-death when writing (not reading) small files and folders; formatted in exFAT, it took the Extreme 900 nearly four minutes (84 MBps) to copy our 20GB mix of files and folders. The result dropped significantly to 89 seconds (224 MBps) after reformatting to NTFS, which is still slower than the sequential numbers. 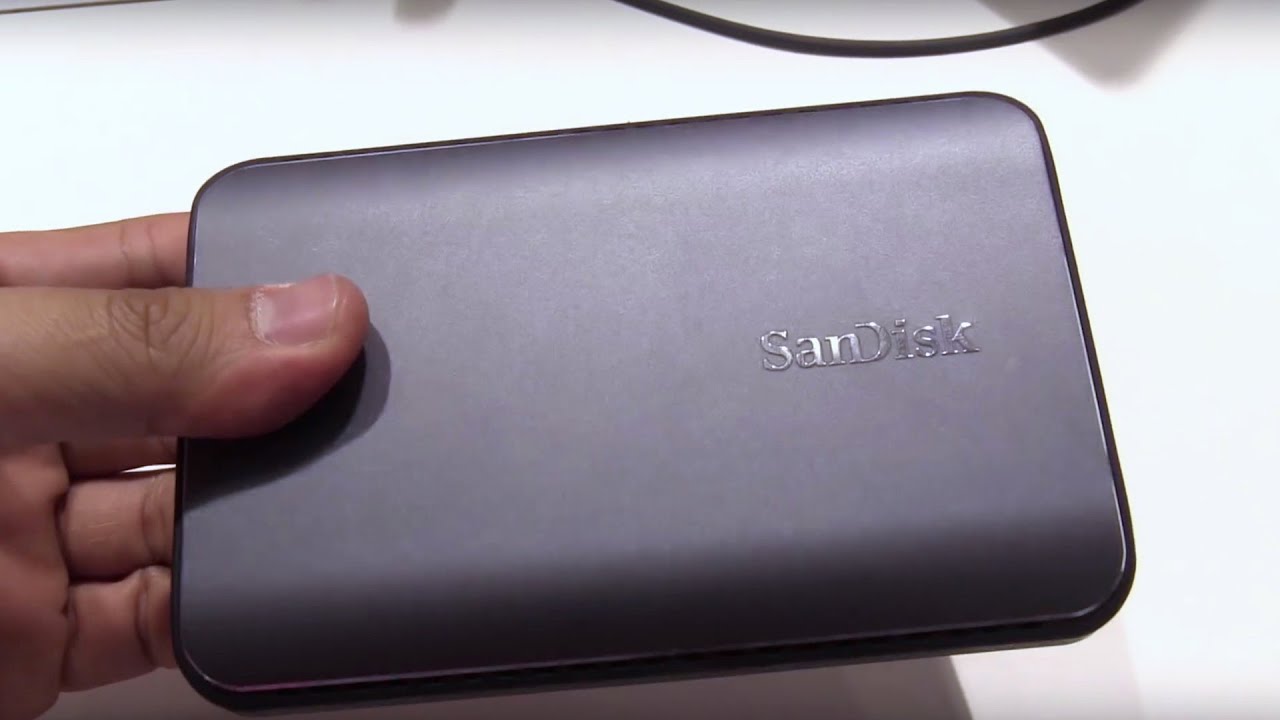 The major downside with 10 Gbps USB 3.1 in general is that it only exists in newer PCs, sometimes not all of them. To benchmark SanDisk’s drive on our year-old testbed, we had to grab a $36 Atech Flash Technology Blackbird MX-1 USB 3.1 Gen II Host Card add-in card. However, laptop users won’t have the chance to enjoy such solution.

Laptop users are confined to their machine limitations. On laptops with Thunderbolt 3.0 ports, only those using Intel’s high-speed Alpine Ridge controller can get 10 Gbps speeds. Having said that, the Extreme 900 still performs well using 5 Gbps USB 3.1 or 3.0. Its write speeds hit 420 MBps and read speeds hit 410 MBps, which is as fast or even faster than any external USB SSD on the market. Upgrading to 10 Gbps USB offers you optimal speed results.

SanDisk is the first to implement a 10 Gbps USB drive in such an effective way. The device’s TLC numbers are quite impressive. 5 Gbps drives are turning into history by SanDisk revolutionary invention; which opens gates for more 10 Gbps USB drives.