Seagate’s Laptop SSHD hybrid drive combines a hard disk with 8GB of flash memory for frequently-accessed files. The gulf in price between hard-disk and solid-state drives remains vast, so do you choose the low-cost and capacity of the former, or is the performance of the latter too good to resist? It’s a tough decision, so why not have both? That’s precisely what Seagate is promising with the Laptop Thin SSHD. The reason for creating this type of hard drive is to provide the speed advantages of a purely Solid State Drive with the less expensive bulk storage capacity of a mechanical HDD. A hybrid disk drive (SSHD) is actually a hard disk drive with a built-in non-volatile cache. The idea is the same as the Intel Smart Response Technology: to use a flash memory to cache the most frequently accessed data. (Check our best picks of SSHD drives)

While several other manufacturers have rolled out their own versions of SSHD, Seagate’s third generation drives claim to use more advanced storage and recall algorithms to better exploit the solid state memory sectors.

Seagate’s third generation SSHDs, now for both laptops and desktops, are marketed as a replacement for HDDs and serve as a good option for those otherwise considering an SSD.

In addition to the new name, we now have two capacity points available. The ‘Laptop SSHD‘ retains the old 9.5mm form factor and now pushes a full 1TB of capacity, while the ‘Laptop Thin SSHD‘ drops a platter and reduces availabile capacity to 500GB. The bonus with the 500GB model is that it maintains similar performance yet shaves off some thickness, making it Seagate’s first 7mm Hybrid.

The drive uses an adaptative algorithm to “learn” the most accessed files and write them in the flash memory, so the true speed gain will be noticeable only after a few times of accessing the file. The main benefit is, of course, the reduction of the operating system boot time, since the files needed at the boot initiation will be the most likely to be cached, as well as frequently launched programs.

Along with the change in nomenclature, Seagate implemented several platform changes to the SSHD Gen3 as well. While Gen2 provided users with 8GB SLC NAND, the Gen3 switched to 8GB MLC NAND. This modification does sacrifice some endurance, but the majority of users won’t deplete the endurance for the lifetime of the drive’s warranty making it mostly a non-issue. By switching to MLC NAND, Seagate is also able to reduce the Gen3 production cost greatly and thus lower the price significantly. Seagate has also decided to streamline their laptop drive production by exclusively offering 5,400 RPM drives. So while the Gen2 had a 7,200 RPM drive, the Gen3 spins at 5,400 RPM. Thanks to improvements in the cache technology, the cache miss pain of hitting the slower spinning drive should be mitigated, but regardless, hitting the drive without flash assistance is going to hurt a little more than in the Gen2 drive.

Most 2.5″ hard drives are 9.5 mm thick, but the Laptop Thin SSHD squeezes its guts inside a 7-mm case. This thinner chassis is a better fit for the growing field of super-slim notebooks spawned by Intel’s ultrabook initiative. It also represents a first for Seagate’s hybrids, which have previously been limited to 9.5-mm models.

The 9.5-mm Momentus XT (left) next to its Laptop Thin sibling (right)

Looking from the front you can see the standard SATA power and data interface, as well as admire the thin 7mm form-factor. This design allows it to fit in more systems, including ultrathin notebooks. 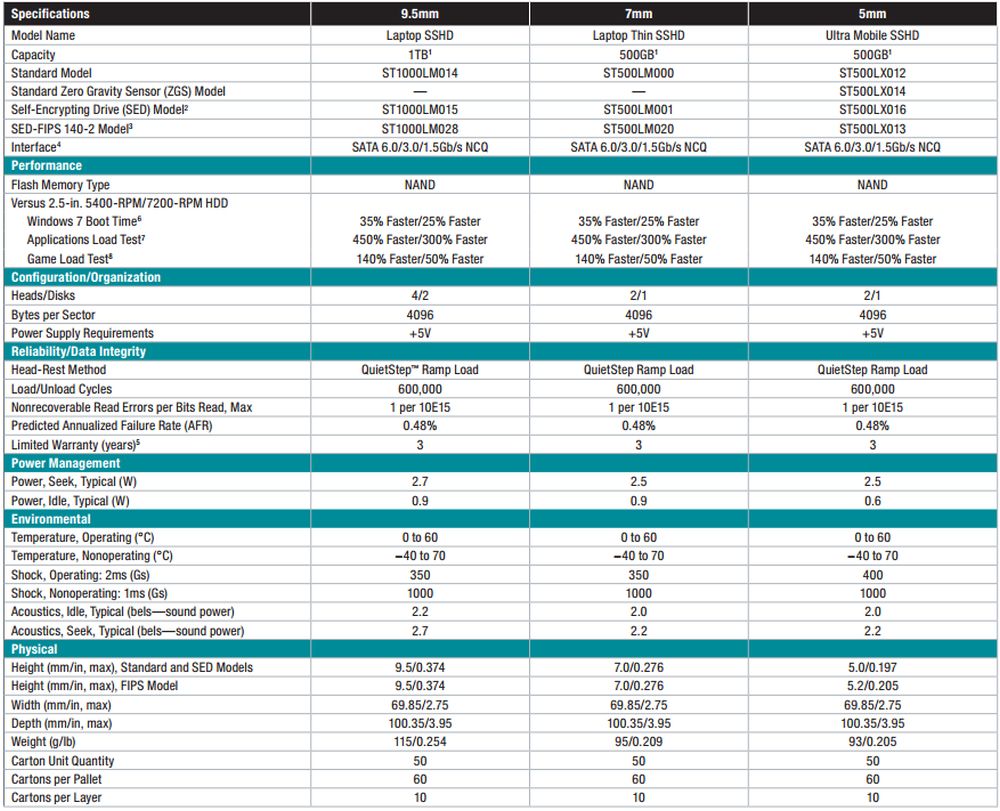 The Seagate 500GB SSHD Gen3 provides users an economical option to get more performance out of their purchase without shelling out for an SSD or sacrificing capacity. The “Thin,” slimmer body at just 7mm goes in just about everything, and Seagate has added other features like doubled DRAM cache, updated controller, and best of all, the drive is affordably priced starting at a cool $80 thanks to the move to MLC NAND and 5,400 spin speed.

Hugh Briggs from HardOCP website tested and reviewed this drive and stated the following: “During my use of the Laptop Thin SSHD I was very impressed with its bootup speed, and our tests reflect that jump in performance as well, booting even faster than the larger stand alone SSD caching solutions. The resumption from sleep and hibernation was fast as promised, and help to provide the feeling of a snappy, responsive system. When using a web browser, email, and other lightweight applications the system was very responsive.”

As for Hardware Secrets website, they stated in their review of this drive the following: “In the PCMark 7 test, which simulates “real world” utilization, the Seagate hybrid drive showed its weapons. It performed superbly, which indicates that in the day-by-day usage of the computer, booting the operating system and launching programs, this tiny drive will be far better than a regular hard drive.”

Seagate appears to be leading the way in the mobile Hybrid drive market. Each and every generation has pushed the envelope further and come closer to native SSD speeds. The catch is those speeds are only attained for data that is in the cache, and the meager 8GB of flash seems to be holding these devices back when in the hands of more demanding power users with heavier workloads. While we’d like to see a larger caches in future models, the current Seagate SSHD yields outstanding performance in a very small package, and does so at a very competitive price.

If you have an ultrabook or slim laptop that only fits 7 mm drives and want the big storage space found on a hard disk drive with the speed advantage of an SSD, but don’t want to pay the fortune that a high-capacity SSD costs, the Seagate Laptop Thin SSHD 500 GB drive is an excellent option. We have chosen this drive as one of the best laptop SSHD drives in the market.