Founded in 1979, Seagate is the leading provider of hard drives and storage solutions. Seagate offers the industry’s broadest portfolio of hard disc drives, solid state drives and solid state hybrid drives. In addition, the Company offers an extensive line of retail storage products for consumers and small businesses, along with data recovery services for any brand of hard drive and digital media type.

Recently Seagate began really pushing the high end of the storage market again with the launch of their Enterprise Capacity 3.5 v4 range. With models at 5TB and 6TB we can create some pretty spectacular storage systems but they are more than just that. Seagate have also tuned them for high performance. So massive capacity and speeds quoted over 200MB/s read/write from a single mechanical drive, according to the manufacturer. If this rate is true, this drive will be one of the fastest internal hard drives available today.

Important Note. The new line serial numbers of this drive end with NM0024. This is to distinguish it from version 3 that ends with NM0033. 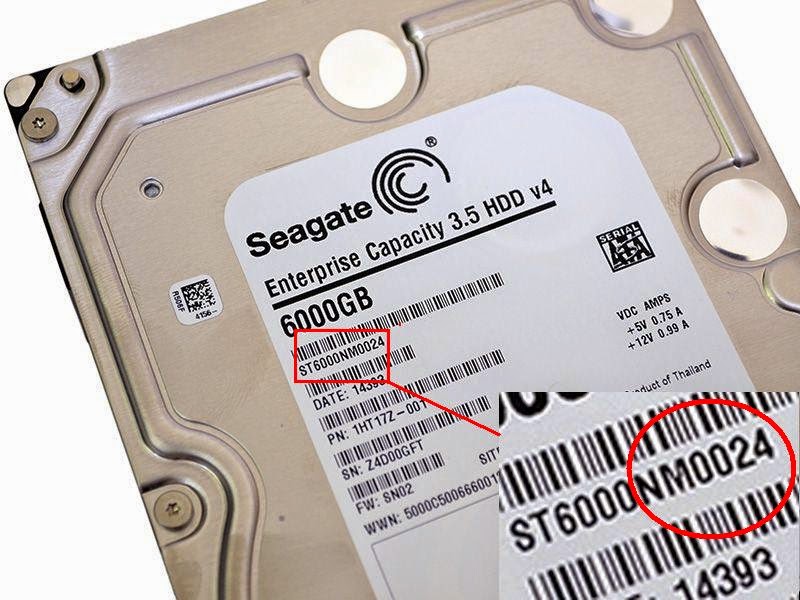 Seagate Enterprise ST6000NM0024 Hard Drive is claimed to be the fastest 6TB hard drive in the existence, with claims of performance 25% over competitive offerings. With an operating speed of 7200RPM, the Seagate V.4 also comes in 5TB, 4TB and 2TB flavors. Each type can be purchased with either 12Gb/s SAS or 6Gb/s SATA connectivity, allowing it to be easily integrated into current systems. Seagate also supports optional SED and FIPS encryption.

This drive is powered by dual processors, features ramp load tech, supports self-encrypting AES-256/FIPS 140-2 and Seagate include sensors for humidity and temperature while providing a 5-year warranty. This is backed by some impressive reliability specifications of 550TB a year (10x a desktop HDD) and MTBF of 1.4m hours. Also worthy of note is that the Enterprise Capacity 3.5 drives offer models which support Seagate Instant Secure Erase as well as traditional Secure Erase.

Seagate Instant Secure Erase allows us to quickly make the data on the drive unreadable by changing the drive encryption key. Also available for the drive is SeaTools which allows us to monitor and maintain our drive over time.

High quality and reliable storage needs are exploding to new levels. While companies can continue to add 4TB HDDs there is an upper limit to the amount that can be added to an existing network. With the Seagate 6TB V.4, users can add 50% additional storage into the same rack U space. Not only will users get 2TB of extra space per HDD in a given footprint, users can choose from SED or government-grade SED FIPS 140-2 all with Seagate’s Instant Secure Erase technology. Built on field-proven, eighth-generation platforms, the Seagate Enterprise Capacity 6TB V.4 is made to deliver high capacity storage, 24×7 reliable storage without sacrificing performance

In terms of performance/use, aspects which are much easier to pin down, the drive very much impresses. It is reasonably quiet, we would certainly suggest using it in a system with anti-vibration dampeners to minimize any potential for noise but it shouldn’t be distracting in normal environments and even on an open test bench we could barely hear it. Temperatures are also kept in check, the drive was noticeably cooler than other 4TB comparison drives (desktop class) but most importantly the speeds achieved on the Enterprise Capacity 3.5 HDD V4 are fantastic. The average desktop drive sits anywhere between 140mb and 170mb but with the new 6TB Seagate speeds can become over 200MB/s right across the drive capacity. On the odd occasion it would drop to 180MB but that is very rare. This is one of the few mechanical drives where file transfers don’t feel slow for those who usually use SSDs.

Of course with Enterprise branding and such a high capacity the drive isn’t really intended for desktop use, even if it does work very well there. This is a drive which is meant to maximize storage in a server/network storage environment.

According to StorageReview, the Seagate Enterprise Capacity 6TB perform strong in their enterprise testing and ran strong against similar HDDs in their application performance analysis. In their 4K random performance, the Seagate 6TB came out on top with 234IOPS write and 155IOPS read. It also had the greatest throughput in our 8K 70/30 test. And overall the Seagate had the lowest average latency of the drives tested by StorageReview. In Their 128K synthetic workload the Seagate 6TB put out some pretty impressive numbers with 223MB/s in both read and write putting it at the top of the group.

The 6TB world is pretty thin, only HGST ships a competing product that is also available with SATA or SAS interface. The problem for HGST though, is that today their platform is new technology, which means unproven. Seagate has gone with a traditional design and is also significantly faster and less expensive by a wide margin. The helium drive has a power draw benefit, but it’s generally outclassed by Seagate in most use cases. HGST’s decision to go with sealed drive technology may tilt back in their favor when they’re able to go to 8TB and 10TB on this platform, but that’s an argument for another day. Today, if you need 6TB and want the fastest and least expensive, Seagate is the clear winner.

For all stated above, this drive is included in our list of the best hard drives of 2015.