Hard disks are old, clunky and noisy devices and they’re bulky too, but at least from a storage point of view they’re cheap. On the other hand SSDs are fast, quiet and discrete by comparison, but of course they’re expensive. Maybe something that sits between the two would be the answer!? Something that was faster than an HDD but cheaper than and SSD, a Hybrid maybe!? Enter the Toshiba MQ01ABD100H – 2.5 1TB Hybrid SSHD, a 2.5″ 1TB HDD with an 8GB NAND Cache.

The driving force behind the SSHD value has always been its rather low cost to performance ratio, where the implemented caching algorithm and NAND flash combine to offer SSD-like performance for your daily activities. This type of storage solution persuades many gamers including PS4 users to incorporate an SSHD in their system instead of either an SSD or HDD. [Check our picks of the best SSHD for PS4]

Toshiba over the years has maintained a pure OEM position from a marketing perspective in the HDD market, with many of their drives being included within notebooks, netbooks and many of the external storage devices.

Now that we have all major players in the HDD market onboard with this hybrid drive technology, WD with their OEM only solution, Seagate with many models including their slim laptop SSHD, and Toshiba with four capacities, it’s a safe bet to say each manufacturers sees a certain amount of value in this market segment.

Toshiba recognizes that the drives clearly won’t put-away SSDs, but its focus lies elsewhere. Toshiba aims to provide consumers with a reasonably priced option that still increases performance at the same capacity point. To that end, the Toshiba SSHDs feature self-learning algorithms that tune performance to meet individual users’ data access patterns. The drives thus create a pool of “hot” data to store in the NAND flash to boost overall performance. How well the data is cached will largely effect the drives performance, as will the limit of 8GB of NAND.

The larger 9.5mm z-height allows Toshiba the opportunity to offer their SSHD’s in both 750GB and 1TB capacities. Each of these drives feature performance assisted by 32MB of DRAM as a buffer and 8GB of Toshiba’s own NAND flash, based on the SATA III specification, while also maintaining backwards compatibility with the older SATA I and II specs as well and comes in a slim 7mm (MQ01ADFH) or standard 9.5mm (MQ01ABDH) form factor. 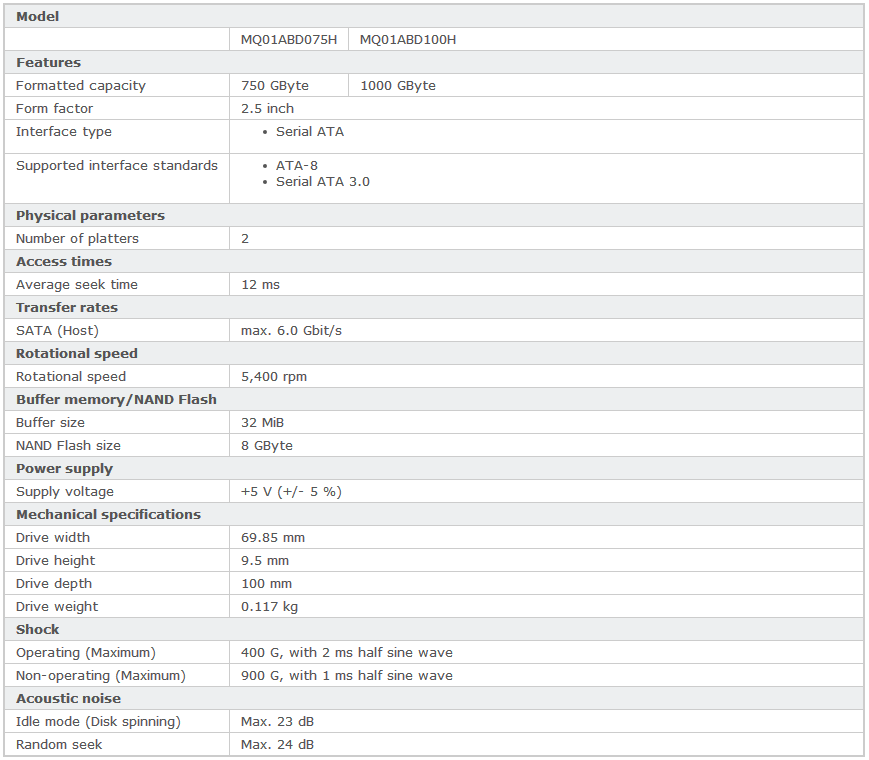 According to Tweak Town website that tested and reviewed the 1TB model of this drive, “in many cases as seen in today’s review, the 1TB Toshiba drive was quicker than its 500GB counterpart and additionally the 500GB Seagate comparable drive, including 4K random read and write. Sequential performance of the Toshiba SSHD was impressive as well, as seen in our ATTO and HDTune testing the drives caching algorithm appeared to catch on rather quickly, boosting our results in both benchmarks.”, Tyler Bernath a product reviewer and tech author on Tweak Town stated.

As for Storage Review website, they stated the following: “We evaluated the Toshiba SSHD’s performance both utilizing its caching capabilities by setting IOMeter to a 500MB file size and by examining how it would operate while being hitting outside the cache as well. In the majority of our testing, the Toshiba SSHD performed at or near the front of the group while utilizing its caching functionality. Those results display exactly what consumers hope to achieve from an SSHD. Hitting the cache delivers transfers at rates often closer to SSDs. We saw that in our real-world testing where the Toshiba SSHD was tops in the HTPC testing that evaluates performance while streaming, downloading and playing movies, and we saw it in the Gaming trace. The Toshiba SSHD also performed well, ranking at the top of the group in 2MB sequential, 4k random, 4k latency and in the server-mixed workloads. On the other hand, throughout the testing, hitting outside of the cache left performance often lagging behind some of the comparables.”

Hybrid drives currently offer the best price/performance ratio in the market and the MQ01ABD100H 1TB SSHD is not an exception to that rule since it currently retails for just $109.99 inside the USA (Amazon.com) Sure you can find many 1TB 2.5″ HDD models for quite less but if you decide to house the OS inside the drive then a hybrid model is well worth the extra investment (purely for backup purposes however a normal HDD is far more suitable). Thanks to its very good performance and impressively low temperature levels the MQ01ABD100H 1TB SSHD by Toshiba is amongst the very few ideal choices for laptops and HTPCs.

At the end of the day, Toshiba SSHD 1TB might be the best laptop SSHD you can think about at the moment although Seagate’s new laptop SSHD performs very well also.