In today’s market, there are countless storage options out there for you to choose for your current system or for a new build that you are planning and in general we find one of two main options being selected for the primary boot drive – this being either a hard drive which offers up large storage capacities, or a solid state drive that mainly offers up the speed. In the OEM sector, the operating system is typically installed on to a hard drive, whilst custom-built systems use either hard drives or the faster technology that a solid state drive has to offer based on the target audience and the price point.

There is a third option that still seems to be pushed to one side of the market, namely the hybrid drive. This type of drive which incorporates both solid state technology along with the volume of a spinning platter has been around for a very few years now and even though there are a good selection of products on the market, there is this unspoken hesitation that a hybrid drive is not all that good and it is better to just cut your losses and get a SSD. [You may want to check our best picks list of the best hybrid drive (SSHD)]

For those who aren’t yet familiar with the concept of an SSHD: manufacturers such as Western Digital present it as “the best of both worlds”, and we find ourselves agreeing with this to a certain degree. Essentially, an SSHD is a conventional hard drive combined with a smaller SSD which serves as a built-in non-volatile cache. The idea is the same as the Intel Smart Response Technology: using a flash memory to cache the most frequently accessed data. Data is first written to the SSD, and is copied to the conventional disk at a later point in time. At the same time, an SSHD attempts to place as much frequently accessed data as possible on the SSD portion, such that read speeds are also increased by as much as possible. This approach allows an SSHD to, to a certain degree, combine the low price per gigabyte of hard drives with the improved performance of SSDs.

Western Digital has a colorful range of hard drives which is kinda fitting right now with everyone turning their Facebook profile into a rainbow. We know the RED NAS drives very well from our review section and WD also has their Purple series for NVR, Black series for performance, Green series for the environment, and the Blue series that is kinda of the normal desktop series.

It has been a while since we’ve seen any new drives in the Blue series, but that has just changed as WD released the newest evolution of this drive series. The WD Blue series has turned into a SSHD series and gotten a NAND boost.

The WD Blue SSHD drives are the company’s newest hybrid offering that is designed for power-consumers such as gamers and content creators looking to increase the overall performance of their higher-end workstation. WD quotes the Blue SSHDs to boast sustained speeds of 150MB/s for the 4TB model and 100MB/s for the 1TB, which falls more in the range of HDD technology performance. Because of its size, the 4TB model was built with the 3.5inch form factor, limiting its use cases to desktop computers only. The 1TB model, on the other hand, uses a 2.5 inch form factor, allowing it to be used for use cases where size is an issue.

WD has indicated that the WD Blue SSHD uses an advanced set of algorithms to track user data-usage, which then analyzes this information and prioritizes frequently used data; simply put, the 8GB of NAND store a pool of “hot” data for enhanced performance in the solid state portion of the device. It adapts, learns and optimizes as new applications and command requests alter over its life-span.

The 4TB drive has a speed rating of 150MB/s while the 2.5-inch 1TB drive only performs up to 100MB/s. The NAND should however boost up the hot file access a lot and improve boot times as well as overall load times of frequently accessed data. 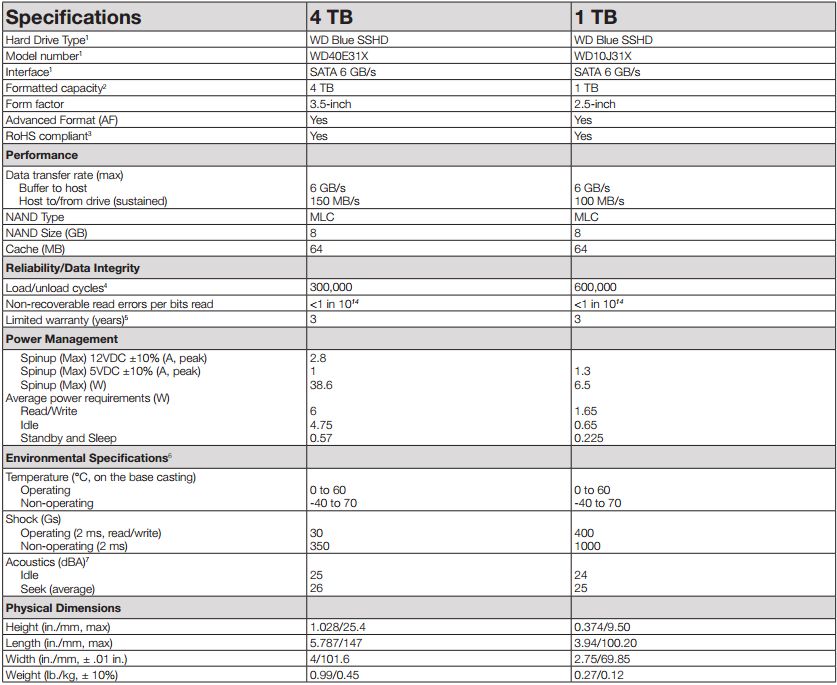 The 4TB WD Blue hybrid drive is designed to offer an improvement in overall performance for desktop workstations, including faster boot ups and faster application load times; both of which are ideal for demographics like gamers and content creators.

When diving into its performance, according to Storage Review lab team, the 4TB WD Blue posted 142.86MB/s read and 142.79MB/s write when measuring 2MB sequential, while random transfer speeds hit 53.37MB/s read and 65.48MB/s write, both of which are roughly one third the performance of most consumer-grade SSDs. Overall, its consumer synthetic benchmarks were weaker than its direct competitor, the 4TB Seagate Desktop SSHD; however, the WD Blue’s real-world performance told a different story, as it posted results of 94.05MB/s and 1,265 IOPS while average latency was calculated at 6.3ms during our HTPC workload (compared to the Seagate’s 67.21MB/s, 904 IOPS and 8.8ms in average latency).

It is commonly said that the best configuration nowadays is to have an SSD unit as the boot drive, and a traditional hard disk as the secondary drive, since the price of large SSDs is still prohibitive. But the WD Blue SSHD is the best of two worlds: it combines a huge storage capacity with the speed boost of an SSD unit.

Despite coming close to SSD performance in some tests, the WD Blue SSHD fared no better than traditional mechanical hard drives in others. If the cache can’t accelerate a particular workload, you’re bound by the drive’s mechanical side. At least the 7,200-RPM platters have a little oomph—in relative terms, anyway.

Even when the cache kicked into gear, the WD Blue SSHD was a step behind the SSDs. Blame the itsy bitsy flash payload, which has less storage than your smartphone and much less internal parallelism than modern SSDs. WD has managed to improve a few key performance metrics by marrying a tiny solid-state sidekick to its standard desktop drive, though. That’s an impressive accomplishment despite the compromise involved.